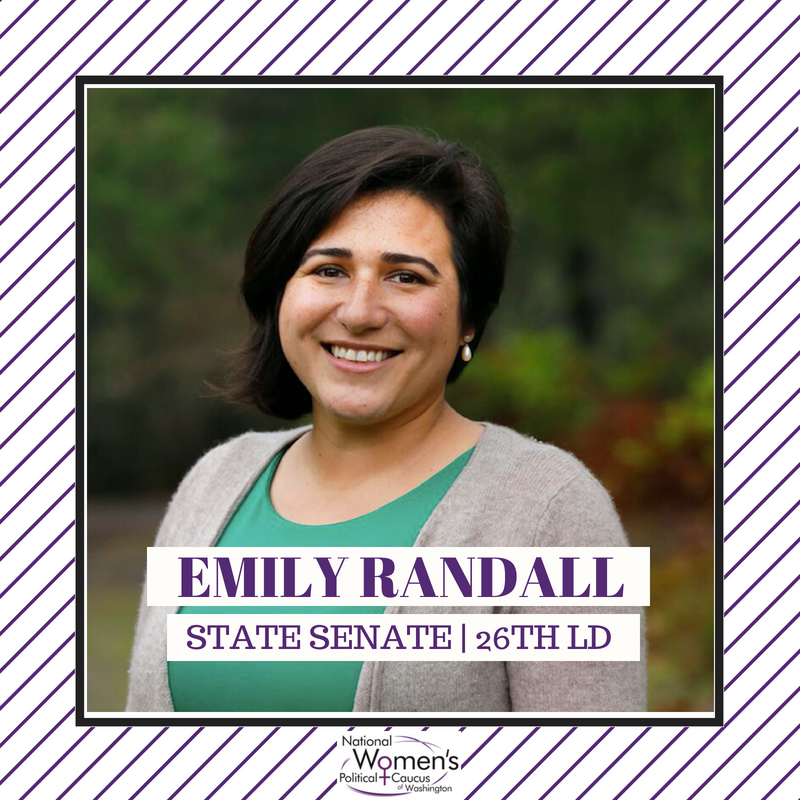 Emily is a second generation Kitsap County native running for the 26th State Senate with the goal of setting aside partisan politics and putting people first. She was born and raised on the Kitsap Peninsula and decided to run because she is frustrated by politicians in Olympia who lack the courage to do what’s right for their families and neighbors.

NWPC-WA: Why are you running for office?

Emily Randall: My community deserves a champion who’ll work as hard for them as they work for their families. For too long, we’ve had representation that puts partisan politics and corporate special interests above the people in our community. Policymaking has long ignored the voices of those most impacted - women, communities of color, and the LGBTQ, immigrant, and disability communities. I’m dedicated to fighting this trend by ensuring my community has a strong voice in Olympia.

NWPC-WA: Why is it important for women to run for and serve in elected positions?

ER: Women are an important voice in our communities and country. Our experiences, our stories -- they matter, and they’re underrepresented. Time and again, politicians vote to attack women's healthcare. Women across the country are underpaid and continue to be subjected to sexual harassment and assault -- it is more important than ever to have a seat at the table. We deserve to be a part of the decision-making process at all levels of government.

NWPC-WA: What advice would you give to a woman who is thinking about running for office in the future?

ER: My advice is this: DO IT!  My campaign manager is a young woman interested in expanding her political skill set; some of my lead volunteers are young women from local high schools whose passion and commitment inspires me daily. I take every opportunity to ask young women to run. We know that women often need to be asked seven times to a man’s once (if that!), so I see my job as asking, and asking…