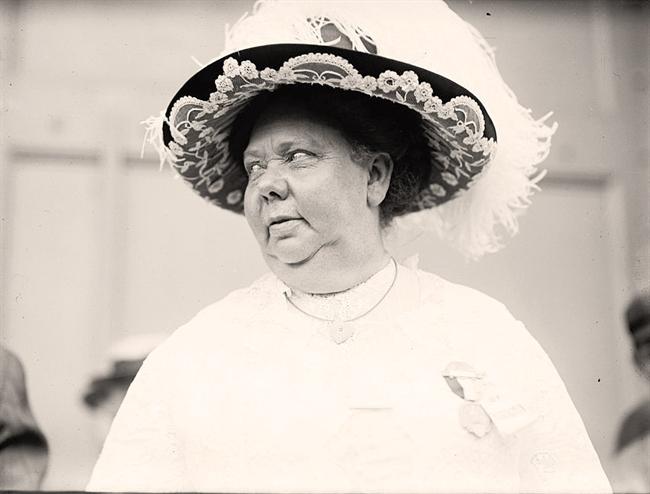 As a young woman, Hutton supported herself as a dishwasher and cook in Idaho mining camps. She met and married her husband there. Levi Hutton was active in the labor movement, and May also became a champion for the rights of mine workers. Fighting for her gender’s Washington womens’ right to vote was a natural extension of her passion for social justice. When the

When the Huttons moved to Spokane after striking it rich with a silver mine investment, May became involved with the Washington Equal Suffrage Association. Thanks to her and other suffragists, in 1910 this state’s women won the right to vote – a full decade ahead of the country overall. Hutton ran for office only once. She came within 80 votes of winning a seat in the Idaho state legislature in 1904. Hutton attributed her defeat to the $20,000 the mine owners had raised for her opponent. One hundred and twelve years later, money continues to be an obstacle for women candidates. They face running campaigns most often against male candidates or incumbents who are seen as more viable simply because they are men. Women candidates also struggle against the reality of who the majority of political donors are: men. Men statistically give more to political campaigns than women, wherein they give most often to incumbents--of which over 60% are men in Washington. To promote financial contributions to women candidates, the National Women’s Political Caucus created a society to encourage donations from supporters in the mid-1980s. It’s fitting that this society proudly bears May Hutton’s name.

We may have had the vote in this state for 106 years, but we still don’t have anything close to parity with men in our city halls, legislature, judicial benches and other elected offices. The May Hutton Society is working hard to change that.

And those dollars are powering real change in our community.

Last year, NWPC-WA trained 60 women, endorsed in 72 races, and elected 55 women to office. That's a 76% win rate, and we saw women majorities sweep Seattle, Spokane, and Yakima city councils. We distributed $27,000 to local government races -- critical to building a pipeline of women leaders -- and our goal is invest $30,000 in top tier legislative and congressional races this cycle.

This year, for the first time in Caucus history, we facilitated two women candidate trainings, the only training of its kind in Washington. We will also be joining forces with Emily's List to facilitate a small group training in June with women candidates who have filed to run for office in 2016.

We've done all of this with an all-volunteer team.

This year’s event will be held May 23 from 12-1pm at the Women’s University Club in Seattle. The society members attending will be inspired by special guests Senator Karen Fraser, candidate for Lt. Governor, and Pierce County Executive Pat McCarthy, candidate for State Auditor. Both would be the first women to be elected to their respective positions.

Not everyone has $500 – or even $250. But everyone can help elect a woman-powered Washington. Every dollar donated to NWPC-WA goes directly to training and electing women candidates. Can you help us start the campaign season strong with a donation of $20? Can't donate? We can always use more volunteers. Email us at [email protected]

If we are serious about achieving parity between men and women in elected office, we need to start by voting for women candidates not only with our voices, but also with our dollars. The money the NWPC-WA raises makes a difference in the campaigns of the dozens of women it supports each year in our state. Money equals clout, and the May Hutton Society has been helping fuel Washington’s women candidates for some 30 years.

Let’s honor May Hutton’s worthy legacy and bolster the ranks of her namesake society. In doing so, we’ll boost the NWPC-WA’s campaign fund, and the chances of success for women candidates.

Reserve your seat at the May Hutton Society now, and email [email protected] to learn about more ways you can contribute to women candidates in 2016.