Women who walked, ran, and marched...

January 20, 2017. The date loomed ominously on my calendar for weeks after election night. I had been searching for ways to increase my participation in politics and for causes I believe in after the massive disappointment I felt on November 8th. That urge to get involved led me to the National Women’s Political Caucus, and I attended my first meeting November 13th. The energy I felt in that meeting was invigorating, and I made a promise to myself that I was going to become more engaged and involved in the coming year.

Like many women I know, I ended up joining several “secret” Facebook groups in the timespan leading up to the election. In the aftermath of the election, several events were posted in these groups, and three in particular caught my eye. They were all during inauguration weekend, and I decided I was going to participate in all three. Below is the narrative of my experience attending these three Seattle-area events.

This 5K came together due to the efforts of a woman named Maddie Brown. She created a Facebook event page, raised money via a GoFundMe account to pay for the race day permit, and put the event together with the help of several volunteers. Registration

was only $20, and it was conveniently scheduled to begin at 6:00 p.m. at Magnuson Park. Since I work Monday-Friday, I could not make any of the other inauguration day events I had seen, but this one sounded very doable. I also knew it might be cathartic to spend this evening with several other like-minded people.

I spent Inauguration Day at work, periodically checking social media to see what was going on in Washington, DC, and around our state. It was a rather exhausting day, and I was a bit apprehensive about what might await me at Magnuson Park. We all were very lucky that evening, as it was clear and cold. I could not convince any of my friends to attend this event with me, so I was on my own.

There were several hundred people who showed up, many sporting headlights and other types of illumination devices. The mood was upbeat, and most people were talking about their plans to attend the Women’s March the following day. Even though I was there by myself, I did not feel alone.

The event’s coordinator posted the next day that over $21,000 had been raised from the event, and she expected the total to climb even higher due to t-shirt sales after the fact. The proceeds benefited Planned Parenthood. I went home feeling a bit more hopeful than I had felt in weeks. It was therapeutic to attend an event like this on the eve of a day that had made me feel rather helpless and hopeless.

I woke up on Saturday feeling a bit nervous about heading to the Women’s March. I had a few friends who were in Washington, DC, and they had been posting on Friday about feeling anxious as well. There were reports of some violence in DC, and also at the University of Washington campus on Friday night. 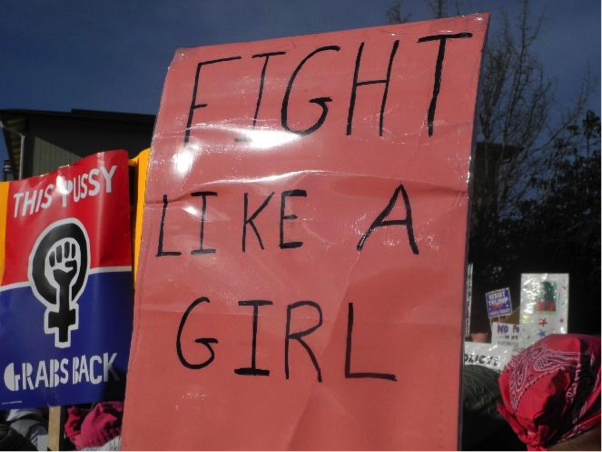 My husband Rich and our friends Chanda and Zach were going to march with us. Our plan was to carpool to Seattle Center, park, and then meet our friend Patty there and take the bus to Judkins Park. All was proceeding as to our plan until we got closer to Seattle Center. We noticed that every single bus stop had large amounts of people waiting at them. Our public transit option was starting to look like it wasn’t going to happen.

We were able to snag a spot at a parking garage on 5th Avenue, close to a bus stop. Our friend Patty found us, and we quickly surmised that we were going to have to either take a cab or an Uber to the park. The bus stop had a line of at least 30 people, and we watched as a very full bus just passed this stop by.

Once we found our way to the park, we were all stunned by how many people were there. We got there around 9:30 a.m., and with each passing minute we could see the crowd growing larger. It was the most polite crowd I think I’ve ever been a part of in my life. As personal space was diminishing, people became hyper-aware of those around them. Each time someone accidentally bumped into you, friendly apologies were profusely exchanged. My friends and I are all veterans of countless rock and roll shows and festivals, and we were quite impressed by the extreme civility displayed by all march attendees.

The weather also cooperated on this day – it had started out a bit gray and foreboding, with a couple of light showers. By the time the speakers had finished and the crowd started to move towards the park exits, the sun had come out. Anyone who is a Seattle area resident knows how rare a sunny Saturday afternoon in January is. Another great omen for the day.

It took us about two hours to make our way out of the park and onto Jackson Street. You could see an ocean of marchers ahead of 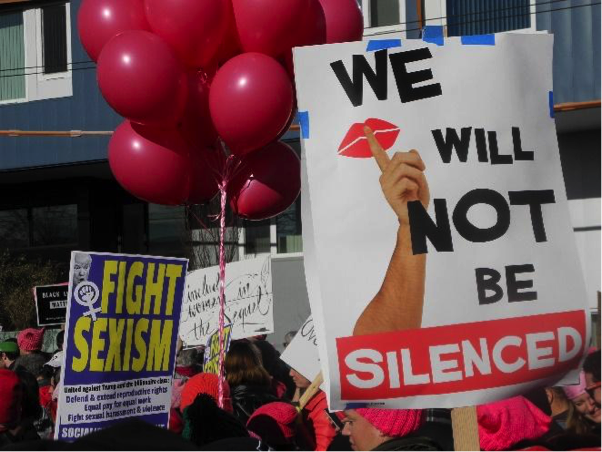 us, and when we’d turn around we could not see the end of the march. People started to get word that the first marchers were already at Seattle Center. We hadn’t even really begun yet! Several onlookers lined the sidewalks of Jackson Street, cheering us on. There were musicians playing on the sidelines, and others with signs showing their solidarity. We moved fairly slowly, but it was orderly and as I mentioned before, very polite. When we finally got to 4th Avenue, we turned right and headed north towards the march end. We finally arrived at Seattle Center around 3:00 p.m. By then, most people were getting ready to head home.

It’s difficult to convey how amazing this march was if you weren’t there. The crowd was very diverse, made up of several different age groups, races, and a pretty large number of men. The signs that were displayed also reflected this diversity. It felt good to be surrounded by so many people who felt as strongly as we do about equal rights for all. The last estimates that I heard about attendance was about 175,000. There were no negative incidents, violence, or arrests at the Seattle Women’s March.

The Pantsuit 5K was another event that was organized in the wake of the election to benefit Planned Parenthood by Run 2 Be Fit. This race was held at Green Lake, and on this Sunday morning the weather did not cooperate. The race was sold out, but attendance was less than the event I attended on Friday evening. The fact that it was held the morning after the march, and that it was relentlessly raining, probably discouraged several people from showing up. There were still a few hundred people there, and what matters is that over $20,000 was raised for Planned Parenthood. The organizers have already secured a date to hold this event next year.

My friend Krishna and I attended, and after a couple of snafus we made it to the start just as people were starting. I gave her my pink “pussyhat” that I had made and wore in the march, as she wasn’t able to attend. It seemed that almost everyone who did participate in this race also marched the day before. We saw a few people sporting pantsuits, in the spirit of the event. I wore my “Hillary unicorn” t-shirt, as I do not currently own a pantsuit that fits (and I wouldn’t want to walk or run in one if I did.)

I have always considered myself to be a fairly engaged citizen – I have been involved in different cancer awareness and fundraising campaigns, and have even lobbied the US Congress twice on behalf of brain cancer patients. I was fairly involved over the past year with the presidential campaign, but I know there was definitely more I could have done.

These events over inauguration weekend also inspired me to become more involved in my own district. A couple of weeks ago I contacted the 36th District Democrats about becoming the Precinct Committee Officer for my neighborhood. I was appointed, and I will be attending my first meeting as PCO on February 15th. There is a critical mass of concerned, motivated and energized citizens who are mobilizing in ways I haven’t seen in my lifetime. My biggest takeaway from all of this is to not give up hope; we are still strong.

In the wake of the great disappointment of November 8, 2016, I could feel my desire to become more involved growing stronger every day. It led me to attend my first meeting of this group, the National Women’s Political Caucus, and start volunteering on the Communications Committee. Volunteering for a cause you feel passionate about is a great way to stay engaged, and to feel like you’re contributing to create a brighter future. If you feel strongly about the mission of this organization and would like to see more women elected into office, please join us! We’d love to have you.

You can become a member here, and email us at [email protected] about volunteer opportunities.