Carolyn Long seeks to inspire women to run for office 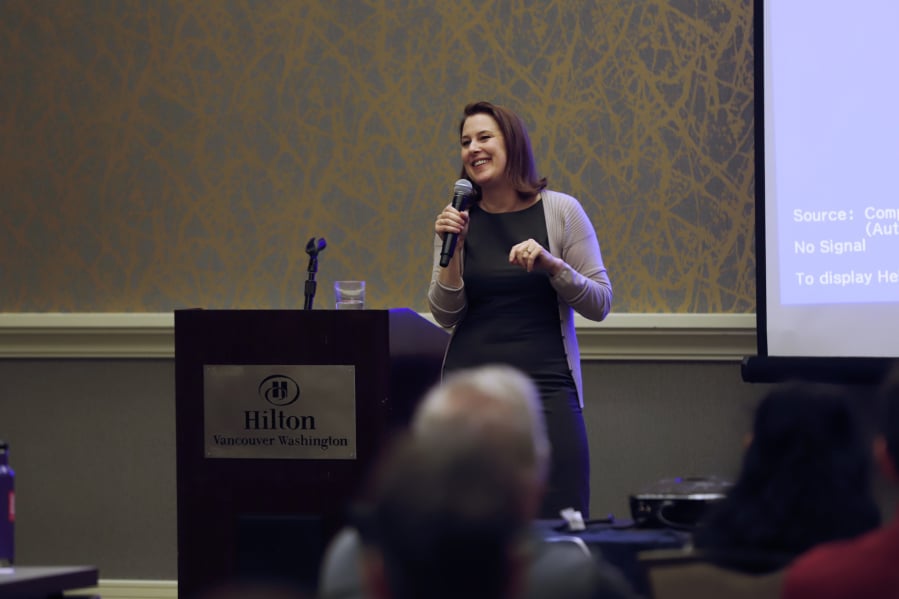 Carolyn Long wants to talk about the power of losing. About how campaigning is a journey, not just a destination. About how keeping an eye on the broader reasons for running for office — serving the public, inspiring others, enacting a shared vision — can help keep a loss in perspective.

Carolyn Long wants to talk about the power of losing. About how campaigning is a journey, not just a destination. About how keeping an eye on the broader reasons for running for office — serving the public, inspiring others, enacting a shared vision — can help keep a loss in perspective.

Of course, that doesn’t mean you shouldn’t go another round.

“Even the journey is a win for you. You learn about yourself,” Long said at a training session for current and prospective political candidates hosted by the National Women’s Political Caucus of Washington at the Hilton Vancouver Washington on Saturday.

During her speech at the training session, the Democrat, who last year lost her campaign against Republican U.S. Rep. Jaime Herrera Beutler, played it coy on whether she’d pursue a 2020 congressional run. She dodged audience questions on if or when she planned to declare another campaign after her 2018 run proved the only serious challenge to Herrera Beutler since the congresswoman was first elected in 2010.

But she certainly didn’t rule it out. And she hit the “try, try again” theme pretty hard for someone who isn’t at least considering a second run.

Losing, she said, is an opportunity for reflection, “and a time for planning for the future.” It’s also a chance to reconnect with the driving factors that motivated you to run in the first place.

“I really thought a lot about my daughter, because I wanted her to have a strong female role model. But I also wanted her to see a woman who when she thought that something had to be done stepped up and did something,” Long said. “And I’m sure that’s exactly what you are doing.”

Her message seemed to resonate in the room of about 60 women and a handful of men. The crowd included politicians like Vancouver city councilor Laurie Lebowsky, those actively seeking office such as council candidates Diana Perez and Adam Aguilera, and others just starting to dip their toes into politics.

The event was designed to serve both groups. For the last three years, the National Women’s Political Caucus of Washington has hosted a series of regional events designed to motivate women to run for office and demystify the process. The group describes itself as nonpartisan but tends to endorse Democratic candidates in races.

The trainings cover nuts-and-bolts, in-the-weeds curriculum on campaign finance, targeting a message and building a team. They’re also designed to more broadly inspire women into thinking they just might be the right person for the job.

“As women, we think there is something more we need to know. We always think there’s more information that we need to be a good candidate,” Bergeron said.

Persistent confidence gaps between men and women, reinforced from childhood onward, mean that women of both parties are less likely to consider running for office and more likely to underestimate their own qualifications for the job.

“Women need to be asked a lot more times to run for office than a man does,” Bergeron added.

But over the last few years, that dynamic has started to shift. In her 40 years with the women’s caucus, Bergeron said she’s never seen this kind of swell of women’s involvement in local and national politics.

For starters, she’s starting to see women vs. women campaigns, like the Long vs. Herrera Beutler race that saw voters choose between two motivated and qualified female candidates. Races like those open up the conversation, Bergeron said, freeing both candidates from having to run as “The Woman” and letting them focus on policy positions.

“Previously, in my first 30 years, it was getting women to run. Now we’re actually having women challenging women. That’s a change,” Bergeron said. She ties the surge to the 2016 presidential election.

As it stands, women are still underrepresented in national government even after a banner midterm election — about 1 in 5 members of U.S. Congress are women.

But even at the local level, more women seeking office has the power to shape policy, Bergeron said.

Nobody was raised in a vacuum. Experiences affect the way men and women view the world and the needs of their constituents. For example, a young single mother looking at shaping public transportation policy might look at priorities that an older man might not consider, Bergeron said.

“My goal is to get more women elected to office, because it changes the conversation. Women bring a different perspective to the table,” Bergeron said.

Saturday’s event drew attendees with political experience as well as total novices like Tiffany Personett, a 28-year-old dog walker and pet sitter from Camas who considers herself “politically curious.”

“I’m very curious about campaigns and how people go about them,” Personett said. “I think I’d like to help people run.”

This article originally appeared in The Columbian.