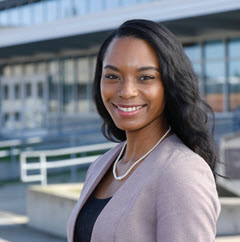 In addition to her role as a Washington State Senator, Nobles serves as President and CEO of the Tacoma Urban League, an elected University Place School Board Director, and the Founder of Ladies First, an in-school program dedicated to empowering young women.

Under Nobles’ leadership at the Tacoma Urban League, the TUL has added childbirth and doula services to its programming. In her service on the school board, Nobles partnered with YWCA and Planned Parenthood to provide a curriculum on healthy relationships, consent, what choice regarding sexual health means, and how to access resources.

With over 15 years of experience as an instructor, mentor, and community leader, Nobles expanded upon her work advocating for equity and justice and fight for inclusive schools, non-discrimination, and equitable opportunities for women and girls in the Legislature.

During her first legislative session, Nobles passed SB 5321, which expands the College Bound Scholarship, providing state financial aid to low-income students who may not consider college a possibility due to the cost.

She also passed SB 5259 which directs the State Attorney General to develop an advisory group to assist with the design, development, and implementation of a statewide use of force data program, and was instrumental in the passage of SB 5180, helping survivors of domestic violence and sexual assault by making it easier for them to wipe their record of sentences received for offenses that were the result of being a victim of sex trafficking, domestic violence or sexual assault.