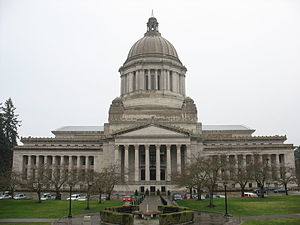 Amidst the heartache many of us felt at the presidential election results this past November, Washington State made some great advances in electing more women to the state legislature—and this week, those new women Representatives and Senators, along with their returning colleagues, are getting to work.

On January 9th, the 2016 legislative session began in Olympia. First, a quick overview of what legislative session entails. Every other year, the Washington State Legislature meets for a long session (105 days) to draft and pass the state’s budget, which runs on a two-year cycle. This year, the Legislature is responsible for drafting and passing a budget for the state to use from 2017 through 2019. If the Legislature cannot agree on a budget by the end of the 105-day session, Governor Inslee may call a special session, or an extension of 30 days. This year, it is likely that several special sessions will be called as Republicans and Democrats hammer out budget detail.

This legislative session, the focus will be on how to fund K-12 education in Washington State, as outlined by the Washington State Supreme Court McCleary decision in 2012. That ruling emphasized that primary education is the paramount duty of the state, in line with our state constitution. In addition to fully funding basic education, the State has seen human services caseloads increase, and faces other unmet needs—all of which has to be decided through the budget process.

Between parties, there is a narrow political divide that has several implications for the coming legislative session. First, it means that it will be more difficult for extreme bills to be passed—but that does not mean that some legislators are not going to try. Republican Representative Matt Shea prefiled bills even before session started that would impose parental notification for abortions, potentially remove public funding for abortions, and otherwise limit abortion access. Second, this narrow divide means that it will also be challenging to advance many of NWPC-WA’s priorities such as paid family and medical leave, improved childcare access, and wage equity—but we are still going to try. Thanks to the many legislative champions the Caucus helped elect this year, we know we have strong allies ready to go to work. Finally, it means that this legislative session is likely to be a marathon, not a sprint, and our elected leaders need to hear from us.

Here’s how YOU can get involved:

Your government derives its consent to govern from YOU, let your voice be heard.

Kiana Scott is a NWPC-WA board Member and PhD candidate at the University of Washington, studying the role of gender in the 2016 election